Updated March 14, 2012 at 9:30PM: I’ll be on the VMware Community Roundtable podcast at 12:00PM PST today, where I’ll be talking about WSX and jumping into a little more detail.

Updated March 20, 2012 at 10:15PM: A lot of people are confused, so I want to point out that WSX is not AppBlast. That’s a separate project with separate goals. WSX is a remote console built using the same underlying technologies as Workstation and Player. It’s also not a front-end for View. I can’t speak for any of those projects’ goals and plans.

Virtual Machines have always been a great way to work with different operating systems, carry your desktop around with you, and manage lots of servers or configurations. In the past, you’d run the virtual machine on your computer and then use a product like VMware Workstation or Player to interact with them.

In Workstation 8, we introduced the ability to share VMs across a network with other copies of Workstation, and to use VMs running on ESXi/vSphere. You could use any computer in your network to reach any other VM and to manage your servers. I covered this in a previous post, and as I said there, we were very proud of this release.

Still, the world is evolving fast, and more people are moving to tablets and smart phones. It doesn’t mean the end of desktops or servers, but it does change how people are accessing their data and applications. And their VMs.

Get to it already 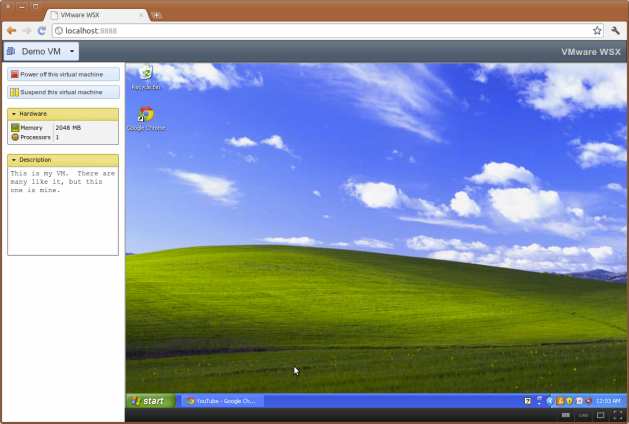 I’ve spent the past few months on a prototype, one I’m proud to say we’re shipping as part of the Workstation Tech Preview. It’s currently called WSX (name may change in time), and it brings your VMs to your tablets, smart phones, and any PC or device with a modern browser.

WSX is installed as a mini web server in your network and serves up an interface for accessing your Workstation Shared VMs and your VMs on vSphere/ESXi 5. You can power your VMs on, off, suspend them, and interact with them. All from a web browser, and all without plugins, with nothing to install on the client end.

This means that you can walk into the Apple store, pick up an iPad right off the shelf, and in less than a minute, start using your desktop back home. (Of course, provided you’ve port forwarded your WSX server so it’s accessible outside your network.) 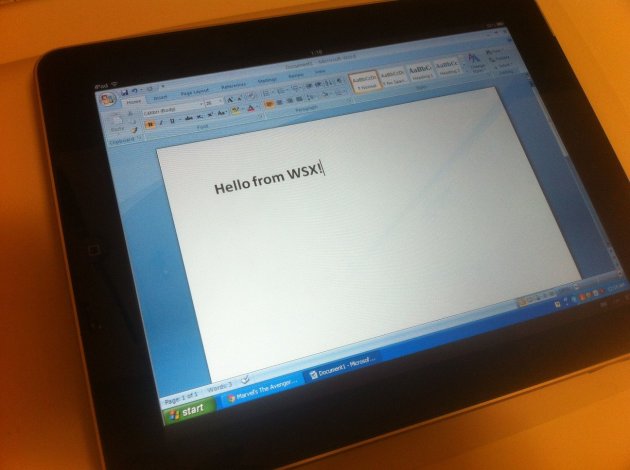 How does it work?

WSX makes use of some modern web technologies, such as HTML Canvas and Web Sockets, along with a small but powerful server to turn your browser into a full-on remote console. The WSX server talks to your Workstation, ESXi, and vSphere instances and relays the appropriate data up to the client running in the web browser. With that data, the client can stay updated with the latest changes to the VM and offer a full display of the console. We don’t use any plugins, meaning there’s nothing to install.

It’s known to work with the latest versions of Chrome, Firefox, and Safari. It also works with the Internet Explorer 10 preview (though I’m still working on some bugs there). And for tablet users, it works quite well with the iPad running iOS 5+. Android users running Ice Cream Sandwich may get some luck with Google Chrome for Android, but I’m still working on Android compatibility. 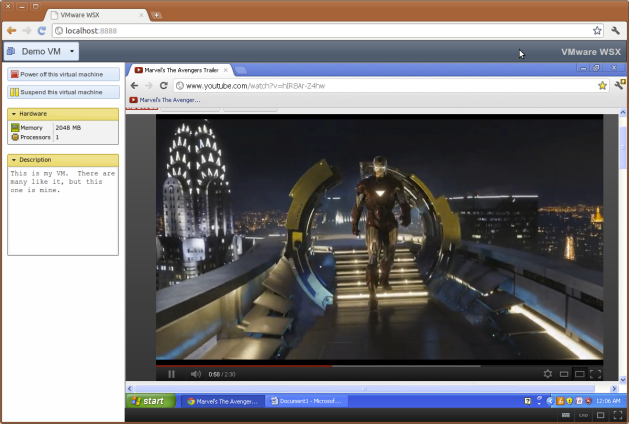 A lot of work has gone into making this pretty fast. If you stream a 720p YouTube video inside a VM and access it from Chrome or Firefox on a modern PC, you should see near-native quality and framerates. It’s not as fast streaming to an iPad just yet, but you’ll see some impressive changes there before long.

On some modern browsers, you can even make your desktop go full-screen, just like you can with Workstation.

Note: There’s a bug on the iPad today with the on-screen keyboard where capital letters and punctuation are a bit broken. I’ll fix it!

Tell me some use cases

As WSX evolves, so too will the use cases. I’m personally very curious to see how people will be using it. 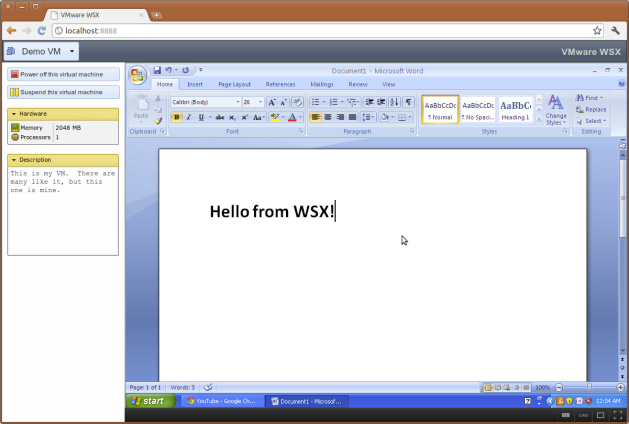 Right now, WSX ships with the Workstation Tech Preview for Linux installer. You’ll be asked for a port (defaults to 8888), and then it’ll install once Workstation is installed. Make sure you have the python2.6 binary installed on your system, or it won’t run! (This is a temporary limitation.)

Now there is a bug today where the installer won’t start the service for you. You’ll need to do:

After that, you should be able to point your browser to http://localhost:8888/. If you want to reach your VM from outside your network, just port forward this one port in your router and you’ll be set.

Windows is another story. We don’t have a build out just yet, but stay tuned on this. I’ll make an announcement when that’s ready.

I can’t speak to our long-term plans, but as I continue to work on the WSX tech previews, my main goals are to make it faster, improve browser compatibility, and make it easier to interact with your VM. This means gestures (two-finger scrolling in place of a scroll wheel on tablets), gamepad controls (play Portal 2 on your iPad!), multitouch, and whatever else we can figure out.

These are my goals, and not necessarily those of VMware’s, so don’t hold the company to anything I say here!

There are some known limitations and bugs in this build of WSX. Please remember, this is a new prototype, and is not a finalized product!

If you try playing around with WSX, I’d love to hear about it. This has been a pet project of mine for the past few months, and I’m pretty excited about it. Yes, there are rough edges that we know about and will be smoothing out as we go forward, but I think it makes for a great prototype, and certainly one I’m starting to love using.

164 thoughts on “WSX: Virtual Machines in Your Browser”