A few months back, I introduced VMware WSX, a new product I’ve been developing at VMware to access virtual machines in any modern web browser without plugins. The response blew me away. News spread to Ars Technica, Engadget, Windows IT Pro, InfoWorld, and many other publications and sites.

I’m happy to announce that we’ve released another build today: WSX Tech Preview 2. You can get it on the Workstation Technology Preview 2012 forum. Just click “Downloads” and download either the Windows or Linux installers.

Like the first Tech Preview, this is a prototype of what’s to come. I’m actively working on a rewrite that will prove much more reliable, with better compatibility and room for future growth. We have a pretty good release, here, though, and I’d like to break down what all has changed.

The first preview of WSX was only for Linux. I work primarily on Linux, and as such, this was my priority. While we weren’t able to get a proper Windows build ready for TP1, we now have it for TP2. So Windows users, if that’s been holding you back, give it a try now!

We’ve optimized the rendering to the screen. This should result in faster updates, making things much smoother, particularly on iOS. We’ve added some mobile (and specifically iOS) rendering improvements, and they really help. As we continue to evolve WSX, expect the experience on mobile to only get better.

When you go to WSX on an iOS device, you’ll see some changes. First of all, the icons will be more crisp and Retina-friendly. Second, there’s a new “Retina” button for switching the  VM into retina mode. I blogged about this a while back, and it’s finally ready to be played with. (Note: There are some occasional rendering bugs to work out.)

But wait! MacBook Pros have Retina displays too! 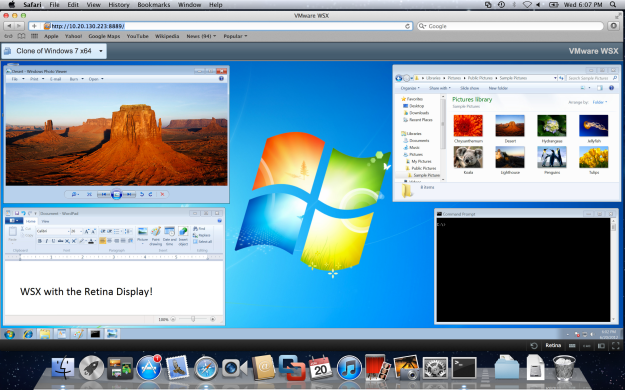 You know that little microphone button on the iOS keyboard on the latest iPad/iPhones? Pressing that allows you to “type” with your voice on native applications. Now, we support it as well.

Open up an application in the VM (Word, for example), pop up the keyboard, and hit the microphone. Begin speaking, and your words will appear automatically in your application as if you were typing them. It’s fun! 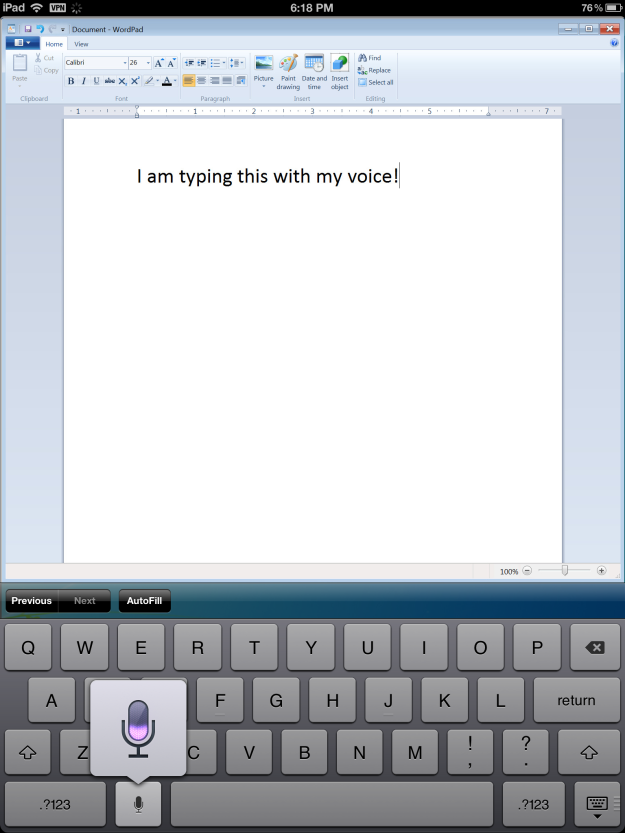 I will warn you, this is not fully baked yet.

The main problem with Android is that most browsers, especially the stock Android browser, do not support the modern web features we need. WebSockets and fast Canvas rendering being a couple of the key issues. Those that do, like Firefox, suffer from other glaring rendering problems that make for a bad experience.

Work is being done here, though, and if you’re running on an Android browser without WebSockets, we now attempt to use a Flash shim that communicates with the server. This makes WSX semi-usable on the Android browser. However, it’s not fast, and there are input problems. In time, I hope to improve this.

I can’t give away all my secrets, but we’re looking into better ways of handling input in the guest (especially with touch devices), and making WSX a bit more scalable. We’ll continue to put out Tech Previews of WSX while it matures.

In the meantime, let us know how it’s working for you.

Updated March 14, 2012 at 9:30PM: I’ll be on the VMware Community Roundtable podcast at 12:00PM PST today, where I’ll be talking about WSX and jumping into a little more detail.

Updated March 20, 2012 at 10:15PM: A lot of people are confused, so I want to point out that WSX is not AppBlast. That’s a separate project with separate goals. WSX is a remote console built using the same underlying technologies as Workstation and Player. It’s also not a front-end for View. I can’t speak for any of those projects’ goals and plans.

Virtual Machines have always been a great way to work with different operating systems, carry your desktop around with you, and manage lots of servers or configurations. In the past, you’d run the virtual machine on your computer and then use a product like VMware Workstation or Player to interact with them.

In Workstation 8, we introduced the ability to share VMs across a network with other copies of Workstation, and to use VMs running on ESXi/vSphere. You could use any computer in your network to reach any other VM and to manage your servers. I covered this in a previous post, and as I said there, we were very proud of this release.

Still, the world is evolving fast, and more people are moving to tablets and smart phones. It doesn’t mean the end of desktops or servers, but it does change how people are accessing their data and applications. And their VMs.

Get to it already

I’ve spent the past few months on a prototype, one I’m proud to say we’re shipping as part of the Workstation Tech Preview. It’s currently called WSX (name may change in time), and it brings your VMs to your tablets, smart phones, and any PC or device with a modern browser.

WSX is installed as a mini web server in your network and serves up an interface for accessing your Workstation Shared VMs and your VMs on vSphere/ESXi 5. You can power your VMs on, off, suspend them, and interact with them. All from a web browser, and all without plugins, with nothing to install on the client end.

This means that you can walk into the Apple store, pick up an iPad right off the shelf, and in less than a minute, start using your desktop back home. (Of course, provided you’ve port forwarded your WSX server so it’s accessible outside your network.)

How does it work?

WSX makes use of some modern web technologies, such as HTML Canvas and Web Sockets, along with a small but powerful server to turn your browser into a full-on remote console. The WSX server talks to your Workstation, ESXi, and vSphere instances and relays the appropriate data up to the client running in the web browser. With that data, the client can stay updated with the latest changes to the VM and offer a full display of the console. We don’t use any plugins, meaning there’s nothing to install.

It’s known to work with the latest versions of Chrome, Firefox, and Safari. It also works with the Internet Explorer 10 preview (though I’m still working on some bugs there). And for tablet users, it works quite well with the iPad running iOS 5+. Android users running Ice Cream Sandwich may get some luck with Google Chrome for Android, but I’m still working on Android compatibility. 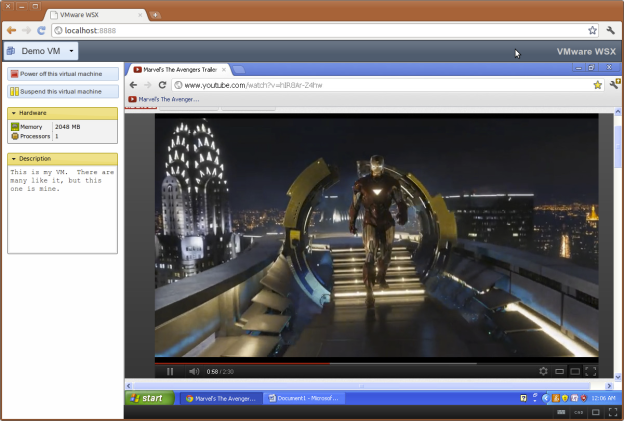 A lot of work has gone into making this pretty fast. If you stream a 720p YouTube video inside a VM and access it from Chrome or Firefox on a modern PC, you should see near-native quality and framerates. It’s not as fast streaming to an iPad just yet, but you’ll see some impressive changes there before long.

On some modern browsers, you can even make your desktop go full-screen, just like you can with Workstation.

Note: There’s a bug on the iPad today with the on-screen keyboard where capital letters and punctuation are a bit broken. I’ll fix it!

Tell me some use cases

As WSX evolves, so too will the use cases. I’m personally very curious to see how people will be using it.

Right now, WSX ships with the Workstation Tech Preview for Linux installer. You’ll be asked for a port (defaults to 8888), and then it’ll install once Workstation is installed. Make sure you have the python2.6 binary installed on your system, or it won’t run! (This is a temporary limitation.)

Now there is a bug today where the installer won’t start the service for you. You’ll need to do:

After that, you should be able to point your browser to http://localhost:8888/. If you want to reach your VM from outside your network, just port forward this one port in your router and you’ll be set.

Windows is another story. We don’t have a build out just yet, but stay tuned on this. I’ll make an announcement when that’s ready.

I can’t speak to our long-term plans, but as I continue to work on the WSX tech previews, my main goals are to make it faster, improve browser compatibility, and make it easier to interact with your VM. This means gestures (two-finger scrolling in place of a scroll wheel on tablets), gamepad controls (play Portal 2 on your iPad!), multitouch, and whatever else we can figure out.

These are my goals, and not necessarily those of VMware’s, so don’t hold the company to anything I say here!

There are some known limitations and bugs in this build of WSX. Please remember, this is a new prototype, and is not a finalized product!

If you try playing around with WSX, I’d love to hear about it. This has been a pet project of mine for the past few months, and I’m pretty excited about it. Yes, there are rough edges that we know about and will be smoothing out as we go forward, but I think it makes for a great prototype, and certainly one I’m starting to love using.

Early on when we began to develop Unity for Workstation, we started to look at ways to give users access to the guest’s start menu. This seemed like an easy thing to solve at first. A month later we realized otherwise. We debated for some time and discussed the pros and cons of many approaches before settling on a design.

We had a number of technical and design restrictions we had to consider:

The design we settled on was to have a separate utility window for representing the start menu. This window can auto-hide and dock to any corner of the screen, or remain free-floating, and provides buttons for each VM. The buttons are color-coded to match the Unity window’s border and badge color. When you first go into Unity, the window briefly shows, indicating where it’s docked.

There are many advantages to this design.

Why not integrate with the Start Menu?

Since the first Workstation 6.5 beta, I’ve been asked why we chose the design we have instead of integrating the start menu into the notification area or into the existing Applications/Start menus. The idea to do so seems kind of obvious at first, but there are many reason we didn’t go that route.

Let’s start with the host’s Applications/Start menus. This seems the most natural place to put applications, as the user is already used to going there. We began going down this route, until we realized the problems associated:

What about the notification area/system tray?

Another possibility that has been brought up is to use the notification area and to tie the start menu to an icon there. While this would generally work, it wouldn’t work too well.

While we’ll probably keep our current model, there are definitely improvements I’d personally like to make in some future release. One such possible example is to allow dragging an entry off onto the panel or desktop to create a shortcut/launcher. If you frequently access certain applications, you’d be able to put them wherever you want them for quick access. Clicking them while the VM is powered off would power the VM back on in the background and then run the application.

A lot of this exists already. While there is no automatic launcher creation, you can create your own that run:

This is not a supported feature at this time and may have bugs, but in the general case it should work just fine.